How much do you know about PV subsidies?

The State Council's Opinions on Promoting the Healthy Development of the Photovoltaic Industry (GF [2013] No. 24) issued by the State Council on July 4, 2013 clearly states that the implementation period of the feed in tariff and subsidies is in principle 20 years. The source of PV subsidy is the renewable energy development fund. In the same year, the NDRC issued FGJG [2013] No. 1638 on August 26, 2013. It is clearly stated in the document that the price subsidy standard is 0.42 yuan per kilowatt hour (tax included), and the photovoltaic power generation project will implement the benchmark grid price or price subsidy standard since it is put into operation, with a period of 20 years in principle.

Until 2018, the electricity subsidy decreased once, from 0.42 yuan/KWh to 0.37 yuan/KWh later (the distributed photovoltaic poverty alleviation project remained unchanged). With the release of the 531 New Policy, the photovoltaic subsidy policy ushered in a new round of adjustment.

Under the guidance price, the feed in price of new centralized photovoltaic power stations shall be determined by market competition in principle and shall not exceed the guidance price. The part of the price determined by the way of market competition that is within the benchmark grid price of local coal-fired units (including desulfurization, denitration and dust removal price) shall be settled by the local provincial power grid; The higher part is subsidized by the Renewable Energy Development Fund.

On May 30, 2019, the Energy Administration officially released the Notice on Matters Related to the Construction and Management of Wind Power and Photovoltaic Power Generation in 2019, as well as the attached Work Plan for the Construction of Photovoltaic Power Generation Projects in 2019. It is the first time in history that the notice configures photovoltaic power generation projects (except for photovoltaic poverty alleviation and household photovoltaic) that need subsidies in a competitive way and participates in the national unified tariff ranking.

If the grid connection is completed before the release of the document but is not included in the subsidy scope, it can be reported to the local power grid enterprise according to the regulations, and included in the 2019 financial subsidy scale after the joint review and confirmation of the local filing authority and the power grid enterprise. The subsidy amount is based on the 2019 price policy (0.18 yuan/kWh) full electricity subsidy. (That is, a "bottom line" policy for all household PV projects that have been connected to the grid in the past but have not been included in the subsidy scope for various reasons).

Before the 15th day of each month, the Energy Administration shall publish the installed capacity for household use of the previous month; When the announced cumulative installed capacity of the last month exceeds the total scale of the year, the day after that month is the deadline for the subsidized household PV installation (i.e., a one month buffer period).

The Notice specifies that the total subsidy budget for new photovoltaic power generation projects in 2020 is 1.5 billion yuan, of which 500 million yuan is for household photovoltaic and 1 billion yuan is for subsidy bidding projects. It is estimated that the installed capacity of corresponding industrial and commercial distributed and centralized ground power stations is about 20GW and that of household projects is about 6.5GW. The specific electricity price subsidy is 0.08 yuan for household use, 0.1 yuan less than the subsidy in 2019, and 50% less than that in 2019 for industry and commerce. The guiding electricity price for the iii-i resource area of the ground power station is 0.49 yuan, 0.4 yuan and 0.35 yuan respectively. Compared with the total subsidy amount of 3 billion in 2019, the total subsidy amount of photovoltaic projects in 2020 has been reduced by half.

On June 18, the National Development and Reform Commission and the Energy Administration jointly issued the Guiding Opinions on Doing a Good Job in Energy Security in 2020, which mentioned that the installed capacity of photovoltaic power generation will reach about 240 million kilowatts by 2020, that is, 35.7 GW of new photovoltaic installed capacity will be added in 2020. 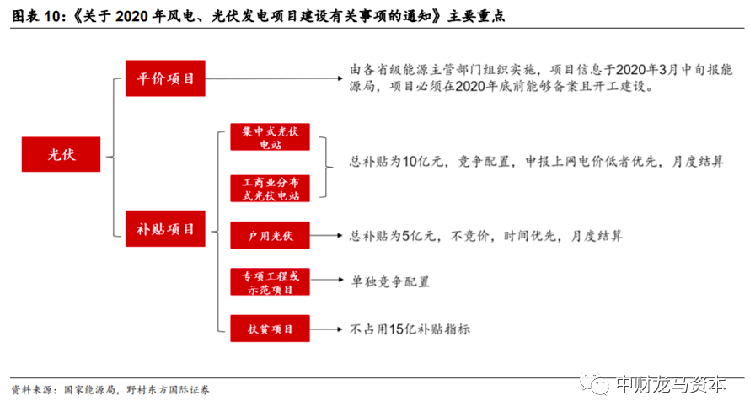 Reliable and efficient from SENTA